Congratulations Meghann Ma for Publishing in Science Advances. Learn more about her work, Suppression of dendrite growth by cross-flow in microfluidics, here. Below is more information about the field & inspiration behind the work.

A new paper from associate professor Jiandi Wan’s group published in Science Advances proposes a potential solution to dendrite growth in rechargeable lithium metal batteries using microfluidics. In the paper, the group proved that flowing ions near the cathode can potentially expand the safety and lifespans of these next-generation rechargeable batteries.

“My students and I are quite excited to be published in one of the Science journals,” said Wan. “It means a lot to know that such a broad research community is interested in our work.”

Lithium (Li) metal batteries are a type of Li battery that uses Li metal as the anode. These batteries have a high charge density and potentially double the energy of conventional Li ion batteries, but safety is a big concern. When they charge, some ions are reduced to Li metal at the cathode surface and form irregular, tree-like microstructures known as dendrite, which can eventually cause a short circuit or even an explosion.

The theory is that dendrite growth is caused by the competition of mass transfer and reduction rate of Li ions near the cathode surface. When the reduction rate of ions is much faster than the mass transfer, it creates an electroneutral gap called the space-charged layer near the cathode that contains no ions. The instability of this layer is thought to cause dendrite growth, so reducing or eliminating it might reduce dendrite growth and therefore extend the life of a battery.

Wan's team showed that dendrite growth could be suppressed with a flow of ions in the space-charged layer above the electrode. Graphic: Jiandi Wan 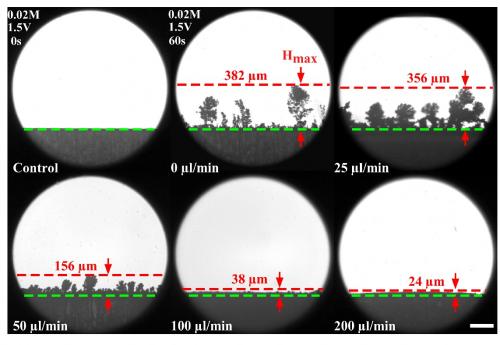 Check out our dendrite growth article featured in STLE